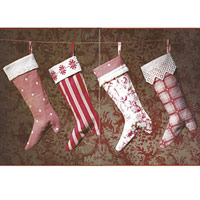 Origin Of Christmas Stocking
Many centuries back, there lived a poor man in a village. He had three beautiful daughters. His wife had passed away due to some illness and he had spent all his money to cure his wife. Thus, he was left with no money to marry off his daughters. The three daughters were very kind and strong and this is what worried their father even more. He was concerned what would happen to them after his death. One fine day, St. Nicholas was passing through the village, when he overheard the discussion of some villagers talking about the pitiable condition of the three girls. St. Nicholas wanted to help the poor father, but he knew that the old man wouldn’t accept money from him.

St. Nicholas decided to help the family secretly, without letting anybody else know about it. He waited until it was night and stealthily sneaked into their house, through the chimney. He had three bags of gold coins with him, one for each girl. As he was looking for a place to keep those three bags, he noticed stockings of the three girls that were hung over the mantelpiece for drying. He put each bag in each stocking and then went away. When the girls and their father woke up the next morning, they were thrilled to find the bags of gold coins. He happily married off his daughters, one after the other, and they remained happy for the rest of their lives. The story about St. Nicholas being so generous spread throughout the village and then all over the land. Since then, it has been a tradition to hang stocking on Christmas in the hope that St. Nicholas would bring a present
.