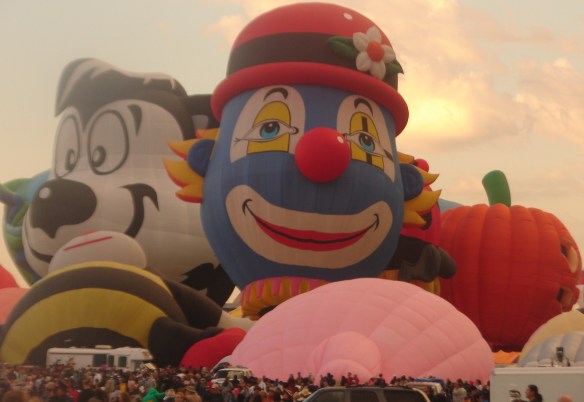 The Albuquerque International Balloon Fiesta is a yearly festival of hot air balloons that takes place in Albuquerque, New Mexico, during early October. The balloon fiesta is a nine day event, and has around 750 balloons. The event is the largest hot air balloon festival in the world and is in the Guinness World Book Of Records for the most photographed event in the world.

It was an early morning and it was cold when we got up but we were told we needed to be there early. So we were up at 4:00am and we got on the road by 5:00am. The traffic was regulated down to a one lane for about two miles before the entrance and the traffic was backed up that long also.

We finally made it towards the entrance and paid the parking fee…. we decided not to participate in the “park and ride” (the city had the option of parking at a distant location and riding on a bus to the the fiesta). We wanted the convenience of leaving when we wanted to but paid for that by the wait time and traffic getting into the park.

When we arrived there were no balloons out and there was an overcast and wouldn’t you know it it started to sprinkle…. and without perfect weather conditions the balloons would never make it off the ground. We were disappointed, in the weather and what seemed to be complete unorganization. People were everywhere and being a first time for us we hadn’t a clue as to what we were to do. 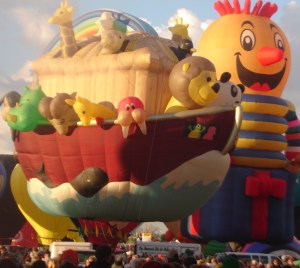 So we walked around and looked at all the vendors and the craziness of what carnival and country fair food is these days. Fried Twinkies, watermelon drink, deep fried Pepsi, fried doughnut hamburgers, fried candy bars and of course funnel cake. We decided on the favorite funnel cake and something new, the watermelon drink. The watermelon drink was ok but after a few sips I came to an understanding that this flavor shouldn’t be in liquid form and I went back to get a fresh squeezed lemonade. The funnel cake was of course delicious.

We sat for about a half hour in the plush grass and waited. They sent up the test balloons (these small balloons with a flame under them) to see the wind patterns and to test the weather since it had sprinkled. After about twenty of those the ok was given but was at drivers discretion. We were happy… we were gonna see this finally.

We started walking around trying to figure out where the balloons that we wanted to see were gonna be. The two bees with their new “baby”, Darth Vadar, witch, lighthouse, Pepsi can were amongst them. We also started collecting the baseball-type cards that the drivers gave out that showed the balloon and information about them…. these are pretty neat and we ended up with about 30 of them.

I tell you it is important to know where the balloons you want to see are going to be located because when all 660 balloons are inflating you sometimes can’t see the sky. That coupled with the sea wave of people makes the experience unbelievable.

We walked around the arena for about three hours seeing every shape of balloon we could think of and many of the big balloons that were shaped either came back down or fall due to it not being the most ideal weather pattern that morning. The space shuttle almost landed on our heads.

When the last of the balloons finally took off or had been deflated and were being packed back up we decided it was best to head home… that and the fact my camera decided to act up and was finished taking pictures.

The traffic was slow getting out and I wondered where all the parking and traffic guides were now everyone was heading home because they had numerous help when we arrived. It ended up being a free-for-all and a little annoying, not to mention dangerous.

The event is a once-in-a-lifetime type of event that you can actually see every year… if that makes sense. I will attend each and every year I am able to and see the new balloons that are added every year. That and the fact we live here makes it a week of constant entertainment with balloons in every directions in the sky.

Hope you will attend it next time…………

2 thoughts on “A Visit To: The Albuqerque International Balloon Fiesta (Albuquerque, New Mexico)”